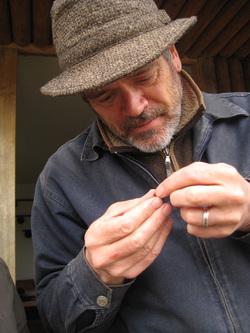 Andrew Greig was born in Stirling in 1951. His childhood was in Bannockburn (the river ran through the garden). Adolescence in the East Fife coastal town of Anstruther. After a year of drifting, salmon netting, hop-picking and writing, he went to Edinburgh University (Honours Philosophy 1975), and lived there and in South Queensferry for nearly twenty years. Through the mid-80s he climbed on a series of Himalayan expeditions, and spent time in Canada (usual reasons). Round 1989 he began spending winters in Stromness, Orkney. He had the sense to propose to novelist Lesley Glaister at Skaill Bay in Orkney. Married in Stromness in 2001, they now live in Edinburgh and Orkney.

First poetry collection ‘White Boats (with Catherine Czerkawska)  (Garret Arts 1973), containing E.C. Gregory Award 1972 material, written during 'the drift year' and university. Men On Ice (Canongate 1977), once called ‘the first (and only) Scottish post-Modern longpoem’) became something of a cult in the climbing world – and years later, due to a misunderstanding over the metaphorical nature of poetry, led to him being asked to climb with an expedition attempting the Mustagh Tower in the Karakoram Himalayas. The story of this improbable and oddly successful trip is in Summit Fever (Century Hutchinson 1985), which has never been out of print. This was followed by expeditions to the N.E. Ridge (the Unclimbed Ridge) on the Tibet side of Everest (Kingdoms of Experience, Hutchinson 1986) and Lhotse Shar. Both climbing books were short-listed for the Boardman-Tasker Award for mountaineering literature.

Meanwhile he wrote the poems of Surviving Passages (Canongate 1982), A Flame in Your Heart (with Kathleen Jamie) (Bloodaxe 1986).

After a brief spell as an advertising copywriter, he survived thanks mostly to the Scottish Arts Council: a series of writers bursaries, book awards, readings, workshops and residencies (Edinburgh University, Glasgow University, Scottish-Canadian Exchange Fellow 1982-3). These, augmented by casual labour and signing on, got him through the grim Eighties (The Order of the Day, Bloodaxe 1990, a Poetry Book Society Choice).

When the Himalayan expeditions ended due to illness (M.E.), he had got in the way of writing prose. A section of journal written in 3rd Person led to writing a first novel, Electric Brae (Canongate, 1992). Undaunted, he wrote another, The Return of John MacNab ((Hodder Headline 1996), and began to live solely from writing.

Following a life-threatening illness he wrote a love in the time of war novel, set in the summer of 1940 That Summer (Faber 2000). His next novel, In Another Light (Weidenfeld & Nicolson, 2004), set in Penang and Orkney, was the Saltire Scottish Book of the Year.

After over-imbibing from the Castallian Springs in Delphi, he wrote the playful epic poem Western Swing (1994) (further adventures of the ‘Men On Ice’ gang in Glencoe, the High Atlas, Marrakech, the Debatable Lands and the East Neuk of Fife), then the shorter lyrics of Into You (2001).

His non-fiction book Preferred Lies (Weidenfeld & Nicolson 2006) is an odd book about being alive, Scotland, transience, fathers and sons, mediated through the practice of golf.

His novel Romanno Bridge, a wintry thriller that is ‘stand-alone sequel’ to The Return of John Macnab, was published by Quercus 2008.

His best known non-fiction book is probably the widely-praised At the Loch of the Green Corrie, which combines meditations on Assynt, Norman MacCaig, personal memoir, Scotland, geology and history and male friendship, with the story of a three day fishing quest. It was the basis of the documentary film 'Fishing for Poetry'  made by Pelicula Films for Channel 4, where Andrew went with fellow fishing and MacCaig enthusiasts Aly Bain and Billy Connolly.


‘GETTING HIGHER: The Complete Mountain Poems’  (Birlinn/ Polygon) is a gathering together of all his poems relating to mountain quests real and imaginary, written over 35 years. It includes the entirety of ‘Men On Ice’ and ‘Western Swing’, ‘real mountain’ poems from the Himalayan years, and a number of recent poems of the Scottish Highlands, especially Assynt, arising from writing ‘At the Loch of the Green Corrie’.

He has taught at half a dozen Arvon residential courses, good number of schools, book groups, libraries etc, and has appeared at most of the main literary festivals in Scotland and the UK, plus the Toronto Harbourfront festival, Vancouver festival, Vancouver Island festival. Writer in residence at Edinburgh university and Glasgow university. Also Scottish-Canadian Exchange Fellow 1981-82.

As a full-time writer he accepts invitations to perform, read from and discuss his work, but sparingly and selectively, needing time and continuity to write. He tends not to do writing workshops, and schools only on occasion (eg some personal connection). He reviews fiction, poetry and non-fiction, in areas of personal interest.


Any enquiries should be directed through his agent Georgina Capel: email georgina@capelland.co.uk.